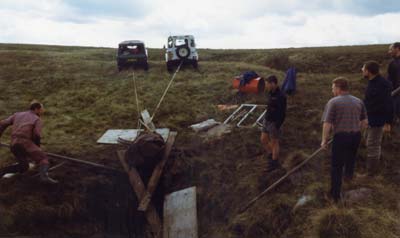 This hole was first looked at in 1997 at the Gaping Gill Meet and was pushed to a depth of about twenty feet.  At the 1998 Winch Meet the hole was again visited and a very large boulder was removed using two Landrovers, two ropes and four bolts. This rock still guards the shakehole and is the reason why the BPC insist on calling our hole “Monolith Pot”. Towards the end of the meet a roomy chamber was entered.

Smoke tests to locate the draft indicated that the way on was going to be by dig a shaft directly beneath the climb down into the chamber.  But it was already the end of the meet.

The 1999 Winch Meet saw work resuming in the floor of the final chamber and steady progress was made removing boulders and excavating a deep pit. This was however getting a bit nerve racking and eventually it was decided that we needed to put in a scaffold cage as we excavated the shaft.

Eventually after some 20 or 25 feet of digging and scaffolding a hole to one side was noticed and we were soon into another sizeable chamber. Again the meet end loomed and as there was no obvious way on work stopped.

Over the following GG meets sporadic attempts were made to trace the airflow in the hole using “Disco smoke” but the deepest part of the chamber appeared to have no airflow and it was difficult to say exactly where the air was going.

In January 2005 a party return to the shaft, the draught was located coming out of the bottom of the scaffolded shaft opened in 1999 and work began to excavate the bottom of the shaft. Fortunately there was sufficient space in the chamber found in 1999 to stack the spoil and so we didn’t need a large team to haul up the shaft and most trips have involved only 3 or 4 people.

By mid-February 05, sufficient progress had been made to see that there was a cleft below the shaft going off to one side. Two visits later and the big rocks blocking the entrance to the cleft were out of the way.

Pete Gray, Dave Headley and Ric Halliwell then managed to enter the cleft and go round a corner and reach a 5ft deep drop in a rift with two parallel walls. The draught seemed to be coming out of the floor under a couple of large blocks so excavation began here.

Two more trips followed before the diggers hit a thick clay band at about 12 feet below the lip of the pit. The draught also seemed to have disappeared.

On a further visit John Allonby rediscovered the draught in a small chamber at the top of the aforementioned drop and digging commenced again. Pete Gray enlarged the way into the chamber to make it easier to get rubble out and progress was made forward following the draught. Edward Whittaker slid his way along a tight space between a slab and the roof and decided that this was the way on. The slab was removed the following day by Dave Headley, Clive Bone and Ric Halliwell.

At the moment the dig is well below the level of the chamber that was the previous end of the cave. The floor of the scaffolded shaft is a further 10 feet deeper with the way on, sadly, appearing to be horizontally back into the boulders. 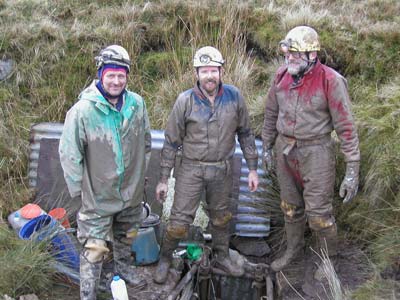 The above is an abridged version of an article by Ric Halliwell from CPC Record No. 78, April 2005