The Near Country, Gaping Gill

This is the story of one such inviting crawl.

Between January 2004 and the club’s Gaping Gill meet in August a digging team consisting at various times of Edward Whitaker, John Allonby and Rob Dove excavated a flat out crawl in South East Chamber. Body tight, this grew in length over several trips until the team reached “The Door” an enlarged solution pocket were it was possible to crouch for the first time, but not turn round. More digging revealed the decorated India Chamber, it was now possible to stand after some thirty minutes of crawling. The passage continued, low and with a strong draught but progress was slow as spoil had to be dragged back along the passage and the team were running short of space to stack it.

By July Rob had re-excavate The Door making it possible for him to join the rest of the team and digging progressed to Spilt Milk Chamber a pretty little place with white calcite oozing down the walls. The following weekend two wide but low chambers were reached, and named “Hobson's”, as John Hobson of Dow Cave fame was over from New Zealand. The following weekend saw even more good progress, with Rob enlarging the crawl to reach Spilt Milk while Edward and John dug a succession of crawls out and intersected a series of six large solution pockets/cross rifts.  These included one with standing room and some good straws and stalactites. During the first weekend in August John and Patrick Warren surveyed the passage, John crawling backwards to enable Patrick to take bearings on his light.

The next phase of exploration commenced during the Gaping Gill winch meet when further digging revieled a well decorated chamber approximately 3m x 5m and a solution tube named Helictite Gardens.  From this chamber the passage started to alter in size, most of the sand having been washed away leaving the crawl more open. About 75m on the crawl turned right and enlarged to a gothic shaped passage 60cm high and wide covered in calcite and a profusion of helictites and short straws. This enlarged to a 3m square walking passage, “75th Avenue” and continued on up a large sand bank and a short stooping section before entering a larger gothic passage with a nice rock window half-way along.  Forwards, approximately 15m of crawling lead to the final stooping chamber which ended with a draughting crawl low down to the left and a large glacial debris filled passage to the right with a slight draught passing through a very tight gap. Having at last found some interesting passage for all the hard work it was time to call it a day so the explorers slowly made there way back to the Main Chamber to exit via the Winch. 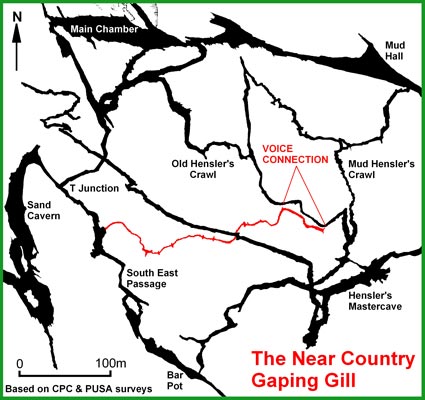 The following Saturday Edward & Patrick went back to complete the survey. This indicated that some of the of the new passage appeared to cross over Hensler’s Long Crawl and at the very end, the solution passage was heading towards the large glacial filled passage in Hensler's Master Cave. With high hopes that the two remaining unexplored crawls would lead into the great unknown, John and Edward set off once more into what was now called “The Near Country”.  Patrick volunteered to go into Hensler's Long Crawl, and at a prearranged time of 2pm by shouting the two parties  would try and make contact.  By 12.30pm the diggers had arrived at the first crawl, progress was slow, the digger was in a tight debris filled solid tube, and the prospects of big new passage quickly disappeared. Also 2pm was approaching. John suggested they should move to the final chamber and listen for Patrick shouting.  This was not required as coming from the direction of the tube the pair could hear someone scrabbling about.  Edward went back into the tube and started to shout.  Patrick’s voice could be heard quite clearly.

With an estimated distance of about 6 metres separating them Patrick described where he was in Hensler’s Long Crawl.  At the second crawl it wasn’t very long before they could hear Patrick again, this time his light was visible through a calcite boulder choke.  Amazing, Hensler's Long Crawl was so close to a big passage.  A final upward digging session led to two small well-decorated chambers “The Varley Chambers”.  A decision was made not to enter the second of these to conserve the flowstone. Well there you have it, 310 metres plus of new Passage in Gaping Gill, or over a 1,000 feet in old money!

The above is an abridged version of an article by Edward Whitaker from CPC Record No. 76, October 2004